Zhang Daqian was one of the best-known and most productive Chinese artists of the twentieth century: over the course of his career he created an average of over 500 works per year. In 2011 Zhang Daqian became the best-selling artist in the world, surpassing Picasso. Although he began as a traditionalist painter, by the 1960s Daqian was also known for making works in both Impressionist and Expressionist idioms. An important aspect of his reputation comes from his achievement in integrating aspects of modernist styles—including Abstract Expressionism—with traditional Chinese painting. 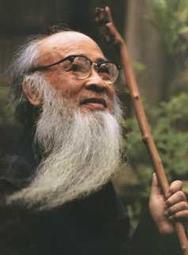 Born in a family of artists in 1899 in Neijiang, Zhang Daqian learned drawing from his mother mother. His first works were silhouettes of flowers and animals. His first commission came at age of 12, when a traveling fortune-teller requested that he paint her a new set of divining cards. At age 17 Zhang Daqian was captured by bandits when returning home from boarding school in Chongqing. The bandit leader ordered him to write a letter home demanding a ransom and he was so impressed by the boy’s brush calligraphy that he made the boy his personal secretary. During the more than three months that he was held captive, he read books of poetry which the bandits had looted from raided homes.

In 1917, accompanied by his elder brother, Zhang Shanzi (an artist famous for his tiger paintings), Daqian traveled to Japan, where he studied textile dyeing. Two years later, he went to Shanghai to receive traditional painting instruction from two famous calligraphers and painters of the time: Zeng Xi (曾熙) and Li Ruiqing (李瑞清).

By the age of 30, Zhang had achieved significant fame and been the subject of exhibitions in China and abroad. A staunch supporter of the Kuomintang, he left China in 1948 and moved to Mogi das Cruzes, Brazil. A meeting he held with Pablo Picasso in 1956 in Nice, France, was heralded at the time as an artistic meeting between East and West. Because of his mastery, productivity and fame, Zhang Daqian is thought of by some as the “Chinese Picasso.”

In the late 1960s Daqian purchased two homes in California on the Monterey Peninsula: he lived in them for most of the next decade. He befriended many Bay Area artists and art historians and also had exhibitions in Northern California. In 1978 the artist moved to Taipei, Taiwan.

A highly social man with many friends, Zhang Daqian wore long scholar’s robes and a flowing beard, and was generally surrounded by an entourage of family, friends and admirers. Zhang Daqian modeled himself, in many respects, after the literati artists of ancient China.

Additionally, he was a forger who enjoyed revealing that an esteemed scroll in a notable collection was actually a copy he had painted. The knowledge he had gained as a young man in Kyoto—involving the dyeing and toning of papers and textiles—proved useful in the creation of his “splashed-color” landscapes, as well as in practice of forgery. Interestingly, Zhang Daqian’s paintings, because of their value are also now believed to be widely forged. His later works, especially his vibrant splashed-color landscapes, are in high demand.

Because of his reputation as a scholar of classical Chinese painting, he was able to pass of his forgeries as “long-lost” paintings by Chinese masters of the past, some allegedly as old as 590AD. Many such works can be found in museums in the United States where some say that there is a Zhang forgery in every major Chinese collection.

Zhang Daqian’s final residence, Moye-jingshe, next to the National Palace Museum of Taipei is now the Memorial Museum of Zhang Daqian. The Memorial Hall covers an area of 1060 square meters. It encompasses five exhibition areas, which feature works from the various periods of the artist’s life.