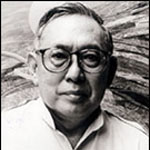 National artist Jose Joya was a pioneer modern and abstract artist who was active as a painter, printmaker, mixed-media artist and ceramicist. It has been said that it was Joya who “spearheaded the birth, growth and flowering of absract expressionism” in the Philippines. His mature abstract works have been said to be “characterized by calligraphic gestures and linear forces, and a sense of color vibrancy emanating from an Oriental sensibility.” Joya’s sense of color has been said to have come from the hues of the Philippine landscape, and his use of rice paper in collages demonstrated an interest in transparency.

Jose Tanig Joya was born on June 3, 1931, the son of Jose Joya Sr. and Asuncion Tanig. He began sketching at the age of eleven. At a young age, he became interested in studying architecture, but found that he did not have the aptitude for the math and science that architecture would require. While attending the University of the Philippines he was introduced to the paintings of Fernando Amorsolo, and began his study of painting. He was initially schooled in the traditional tradition — in which the standards had been set by Amorsolo and Tolentino — but gradually was influenced by American abstraction and by the emerging trends in Philippine modernism. He was mentored by Guillermo Tolentino, Ireneo Miranda, Domindaor Castaneda and Virginia Agbayani.

Joya graduated from the University of the Philippines (UP) in 1953 with a Bachelor’s Degree in Fine Art, earning the distinction of being the university’s first Magna cum Laude. In 1954 the Instituto de Cultura Hispanica of the Spanish government awarded him a one year grant to study painting in Madrid. Travel/study scholarships to Madrid — which came about through the influence of PAG member Fernando Zobel de Ayala — were also given to other PAG artists including Arturo Luz, Nena Saguil and Larry Tronco. After returning from Spain, Joya finished his Master’s Degree in Painting in 1956 at the Cranbrook School of Art in Michigan, with the assistance of a Fulbright Smith-Mundt grant. 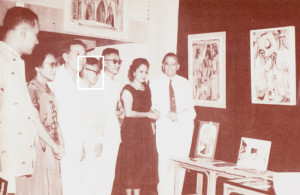 Above: The opening of a Jose Joya exhibit, featuring religious paintings, at the Philippine Art Gallery. Jose Joya (indicated in white) is 4th from the left.

His early works were representational paintings that showed the influence of Vincente Manansala and Anita Magsaysay-Ho. During the late 1950’s, as he became involved in the Philippine Art Gallery — founded in 1950 by a group of women writers led by Lyn Arguilla — he became one of the “new wave” of artists who developed abstract paintings. His first one make show appeared at the Philippine Art Gallery in 1954, and in March of 1958 he won first prize for his non-objective “Painting” in the 11th Annual PAG Art Exhibition, held at the Northern Motors Showroom. He won more prizes in 1959 (Second place for “Space Transfiguration), 1960 (Third place for “Horse of Life) and 1962 (Third place for “Cathedral). 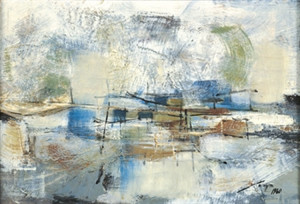 Joya was often present a the “Saturday Group” which met for weekly art discussions at the Taxa de Oro Restaurant in Manila. In 1962, when Joya was serving as the President of the Art Association of the Philippines, he and Napolean Abueva represented the Philippines in the prestigious Venice Biennale: it was the first time that the Philippines had participated. He displayed a 1958 horizontal abstraction titled “Granadian Arabesque,” a painting which features powerful swipes of impasto mixed with sand, and which is now in the collection of the Ateneo Art Gallery. Joya later wrote about participating in the Biennale, and reported on the novelty, desire to shock and “dazzle” of the work on view. 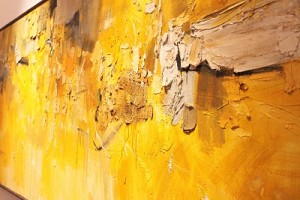 Side view of the impasto of Joya’s “Granadian Arabesque”

In the late 60s received grants from the John D. Rockefeller III Fund and the Ford Foundation, which allowed him to paint and study at the Pratt Institute in New York between 1967 and 1969. Among the positions he held were:

– President of the Art Association of the Philippines (AAP) 1962-65
– Dean of the UP College of Fine Arts 1970-78, where he modernized curriculum and established scholarships.
– Chairperson of Philippine Delegations to China, 1961 and 1972

In the 1970s Joya executed two large murals, “Lanterns of Enlightenment” and “Mariveles” which display vivid interplays of shape and tone. When traveling overseas he often made rapid, on the spot sketches in pencil, charcoal or pastel.

In 1981 a retrospective of some 200 of Joya’s works was held at the Museum of Philippine Art. In1987 the French government awarded him membership in the “Order of Chevalier des Arts et Lettres.” 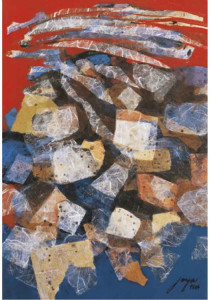 Joya once stated “the artist is concretizing his need for communication. He has an irresistible urge to reach that level of spiritual satisfaction and to project what he is and what he thinks through his work.”

Joya died in May of 1995 at the age of 63 after complications from a prostate operation.

In 2003, eight years after his death, he was conferred the title of National Artist for his pioneering efforts in developing Filipino abstract art. A retrospective of his work was held in August of 2011 at the National Museum.