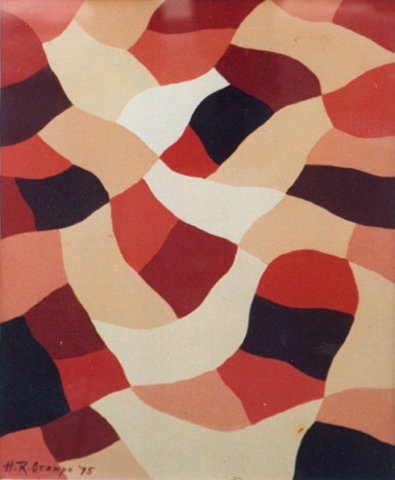 OCAMPO, HERNANDO RUIZ aka H.R. b. Santa Cruz, Manila 28 Apr 1911 d. Caloocan City, 28 Dec 1978. National Artist in Painting. He is the son of Emilio Ocampo and Delfina Ruiz. He married Irene Illovato in 1932, but she died in 1945. His second wife is Cresencia Valenzuela. In 1931 he started working at the Philippine Education Company (PECO). In 1935, he worked as executive secretary of the National Paper Mills Inc. After the war, he worked in the script department of Palaris Feler and Fernando Poe Productions.

He began as a writer in English. He was one of the organizers of the Veronicans, a young writers’ group which included Francisco Arcellana and Estrella Alfon, N.V.M. Gonzalez, Manuel Viray and Angel G. de Jesus, among others. His house at Maypajo, Caloocan served as a frequent venue for their meetings. As a Tagalog fictionist, he is known for his prizewinning “Bakya” (Wooden Clogs) and “Rice and Bullets,” both showing a consciousness of the proletariat. During the Japanese Occupation, Ocampo turned to writing in Tagalog and wrote plays for the stage, becoming the chief scriptwriter and assistant director of the Associated Artists. The Japanese also appointed him censor for the stage and for the Taliba newspaper, at the same time that he had an intelligence assignment as second lieutenant in Straughn’s Guerrillas.

He also became editor of the Manila Sunday Chronicle Magazine. He was producer-director of the Filipino Players Guild, which specialized in radio programs, 1950-1953. He became executive director and senior vice-president of Philprom, 1958-1968.

Together with Carlos Francisco, Galo B. Ocampo, and other modem artists, he was a member of the Thirteen Moderns founded in 1938. With Vicente Manansala and Cesar Legaspi he formed the triumvirate of neo-realists. He was also a leading member of the Saturday group of artists which met regularly at the Taza de Oro.

Since Fernando Amorsolo was the dominant artistic influence in the 1930s, most artists who began painting before the war, including H.R. Ocampo, emulated Amorsolo, although unsuccessfully, as Ocampo did not take formal studies in the University of the Philippines School of Fine Arts where the maestro was based, preferring to pursue art on his own. His Contrast belongs to this period.

Ocampo’s proletarian period reflected the debate in the 1930s between “proletarian art” and “art for art’s sake” which was also an issue in the United States at the time. It was during this period that WWII broke out, resulting in widespread dislocation, hunger, and misery. Under such conditions, his paintings showed the stark realities of the time, such as the painting of an emaciated man staring at an empty plate with high-rise buildings in the background to imply the wide class gap of the period. Another was the painting entitled Calvary, 1948, which showed the triple Crucifixion of Christ flanked by two thieves against the background of factories spewing smoke. In the same period his triptych Tatlong Larawan (Three Pictures) also developed the religious theme. These paintings, while still largely figurative, were not in a realist style, but were rather expressionist in their distortion and their use of garish colors.

His transitional period, 1945-1963, was a period of intense creativity in painting. His works from this period became more stylized and showed an increasing tendency to abstraction in their primary concern for design, color, and texture. Some of his more complex and highly textured paintings, such as Fiesta, are of this period. It was also during this time that the Philippine Art Gallery (PAG) opened its doors to modernist painters and 6campo, Legaspi, and Manansala made the PAG their second home.

Most of his paintings of the 1960s belong to his mutants period. He derived inspiration from The Beginning of the End, a science-fiction fantasy film on the mutants and strange forms spewed forth by nuclear explosions. The painting Dancing Mutants, for instance, shows fingerlike shapes with a nervous, quivering quality. Towards the end of the 1960s he developed into the visual melody period in which he brought back tonalities into his’ abstract designs of organic shapes, creating a richer form of abstraction. An example of this style is Genesis, 1969, which was executed into a tapestry for the main theater of the Cultural Center of the Philippines (CCP). Its central motif is a bright flame which casts oscillating shadows and reflections on the surrounding design of red and yellow elements. Ocampo himself said that the work represented “the full flowering” of his visual melody period. It also represented the final maturation of the abstract style of the artist in painting the search of the Filipino spirit.

Ocampo’s awards from the Art Association of the Philippines are: sixth prize, Nude with Candle and Flower, 1948; first prize, Arabesque, 1950; second prize, Man and Carabao, 1950; first prize and special award, Ancestors, 1951; honorable mention, Intramuros, 1951; third prize, Fifty-Three E, 1954; honorable mention, Fifty-Four A, 1955; second prize and purchase priz, Nativity; 1958; and first prize, Circle, 1969. He won third prize for Angel’s Kiss in the 1949 Manila Club art exhibition. He received the Patnubay ng Sining at Kalinangan Award, 1969, and the Diwa ng Lahi Award, 1976, both from the City of Manila. He was awarded the Gawad CCP para sa Sining in 1979. He was proclaimed as National Artist in Visual Arts in 1991.