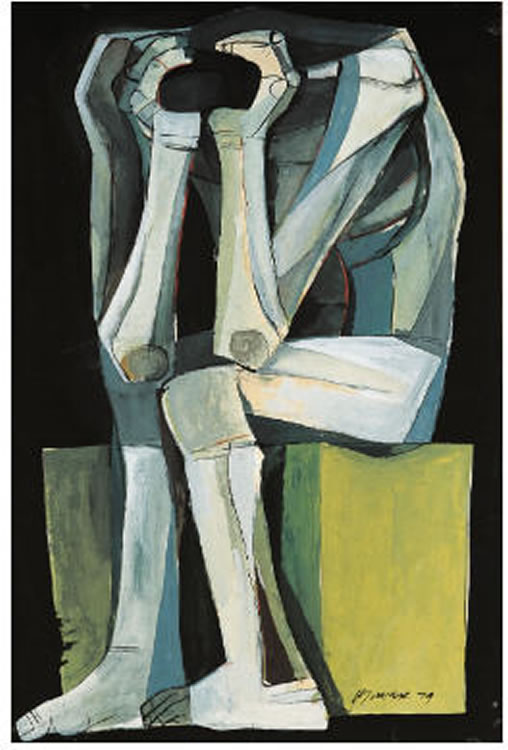 Ang Kiukok, an ethnic Chinese painter who studied under Vincente Manansala, attained prominence for an Expressionist style that fused Cubist, Surrealist and Expressionist aspects into a unique personal aesthetic. Kiukok has been called “one of the most dynamic figures in contemporary Philippine arts.” It has also been said that he “opened eyes with his violent Cubist paintings of fighting cocks, stray dogs and tormented lovers,” and that his Expresionist works “sustained a hard-edged evocation of fortitude and indignation in a hostile setting of screaming men, crucifixions and junk.”

Painter Ang Kiukok was born to immigrant Chinese parents, Vicente Ang and Chin Lim. He was an only son with five sisters, born to Chinese immigrants from Fukien; Vicente Ang and Chin Lim. His father wanted to name him Hua Shing, meaning “Chinese-born”, but decided to look for another name when he learned that his cousin’s son had been given the same name. Worried about China’s fate against the invading Manchurians at that time, his father named him Kiukok, which means “save the country.”

As a young man, Kiukok did comical sketches and also studied Chinese ink and brush painting methods. His first traditional brush paintings were influenced by those of the Chinese master Qi Baishi. Kiukok also copied movie ads from newspapers while tending his father’s sari-sari store, a business that he was expected to someday run.

Against his father’s wishes, Kiukok began his formal art studies at Manila’s University of Santa Tomas from 1952 to 1954. At Santa Tomas, Vicente Manansala was his primary mentor, and also became a lifelong friend. Kiukok also studied with other prominent professors including Victorio Edades, Diosdado Lorenzo, Jose Garcia Llamas, Carlos “Botong” Francisco, Galo Ocampo, Virginia Ty, and sculptor Francesco Monti. At the conclusion of his studies, Kiukok taught art in a school of overseas Chinese for five years.

Kiukok’s first formal recongntion came in the form of a third prize award in the Shell National Students Art Competition for Calesa in 1953. Then, st the urging of Vicente Manansala, Kiukpk launched his first one-man show at the Contemporary Arts Gallery in 1954. After that he earned numerous awards from the Art Association of the Philippines for his works: Honorable Mention, “Still Life” (1951), First Prize, “The Bird” (1959), Third Prize, “Still Life in Red” (1963), Second Prize, “Fish” (1963), and Second Prize on “Geometric Still-Life Fish” (1963).

The turning point of his career as an artist came in 1965 when he and the late Vicente Manansala traveled to New York. There, he was surprised at the urban squalor and alienation he found, and also influenced by American abstract art. Upon his return to the Philippines, his style took a turn towards a new vivid Expressionist that including themes of agony, sorrow and madness. The difficulty of these themes caused a temporary loss of interest on the part of art dealers and collectors.

In 1976 Kiukok received the Patmabay ng Kilinangan Award from the City of Manila. In 1978 he as given an “Outstanding Alumnus” award by the University of Santo Tomas. In 1980 his painting “Modern Angst” was a finalist in the Mobil Art Awards. In 1990, he was featured with Onib Olmedo, and Solomon Saprid in a show entitled Three Figurative Expressionists held at the Cultural Center of the Philippines (CCP.) 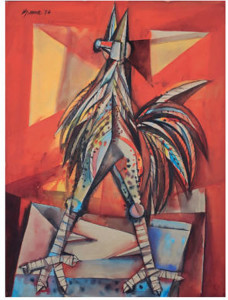 During the Marcos Regime, and the period of martial law in the Philippines, Kiukok returned to painting violent and gruesome imagery that some interpreted as a commentary on the political atmosphere of the era. Once, when asked about the anger in his art he replied “Look around you. So much anger, ugliness. And also madness.”

Towards the end of his life Ang Kiukok became internationally known, and his works appeared in exhibits in Manila, Japan, Taiwan, Singapore, as well as in the Netherlands, Canada and the United States. His works are displayed in various collections, such as the Philippine National Museum, the Ateneo Art Gallery, the Cultural Center of the Philippines and the National Historical Commission in Taipei. Over time, his art gradually lost its harsh edge and he near the end of his life he created paintings of clowns and richly dressed harlequins juggling and clowning. In 2001 President Gloria Macapaganal-Arroyo named him a National Artist for visual arts.

Ang Kiukok died of prostate cancer at the age of 74 in Quezon City, Philippines. He was survived by his wife, Mary de Jesus and four children.