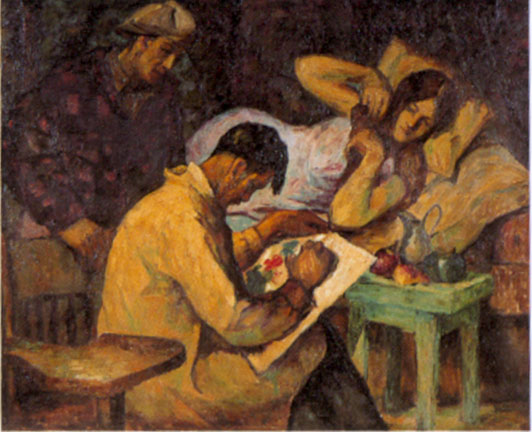 Victorio Edades Edades was the son of Hilario Edades and Cecilia Edades. He was the youngest of 10 children, 6 of whom died of smallpox. He received his early education in barrio schools. By 7th grade he was considered the “apprentice teacher” in art class due to his talent.

After high school, Edades and his friends traveled to the United States. Before enrolling in Seattle, Edades incidentally made a detour to Alaska and experienced working in salmon canneries. Nonetheless, he moved on to Seattle and enrolled at the University of Washington where he took up architecture and later earned a Master of Fine Arts in Painting.

He married Jean Garrott, an American who also later taught English and drama at the University of the Philippines.

In 1922 the travelling exhibit of the Armory show opened his eyes and that of the American public to the artistic ferment in Europe led by Cezanne, Gauguin, Matisse, Picasso’, Duchamp, the surrealists, and the Dadaists. While it drew outcries from the conservative public, it gave Edades the artistic direction he was looking for. Deviating from the academic style, while retaining some of its characteristics, he executed two paintings in 1928: “The Sketch,” (also called “The Artist and His Model”) and “The Builders.”

When Edades returned to the Philippines in 1928, he embarked on his crusade to change the course of Philippine art which was then dominated by painter Fernando Amorsolo and sculptor Guillermo Tolentino.

Barely a month after his return he had a one person show in December at the Philippine Columbian Club. It was met with shock and disdain by a public accustomed to Amorsolo’s rural idylls. Edades decided to shift strategies: it was through teaching that he would conduct his campaign for advanced art.

The year 1934 provided him with a new opportunity to reach the public through art when he was commissioned by the architect Juan Nakpil to do a mural for the lobby of the Capitol Theater on Escolta Street. For his assistant Edades chose Carlos (Botong) Francisco, an illustrator for the Philippine Herald, who in turn brought Galo B. Ocampo to the project. Together, they formed the first triumvirate in Philippine modern art.

In the 1930’s the famous press battle between the modernists and conservatives erupted. In an interview with A. B. Saulo for an article in the Monday Mail, Edades fired the first shot by bewailing the conservative orientation of art and its insistence on the bright aspects of life while excluding the dark side of reality as a valid artistic subject. In addition to Edades, those who spoke for the modernists included Salvador P. Lopez and Jose Garcia Villa; the conservatives had Ariston Estrada, Ignacio Manlapaz, and Fermin Sanchez on their side. The debate was interrupted by WWII, but resumed in 1948, this time with Edades and Tolentino on opposite poles, debating the pros and cons of modern art on the pages of The Sunday Times Magazine and later in “This Week” of the Manila Chronicle.

In 1937, Edades, Ocampo, and Diosdado Lorenzo organized the Atelier of Modern Art, which led to the formation of the “Thirteen Moderns,” thus boosting the cause of modernism with new talents. The support system for modernism was further strengthened with the founding of the Art Association of the Philippines (AAP) and the Philippine Art Gallery (PAG) in 1951. The modernists included Edades, Carlos Francisco, Galo Ocampo, Lorenzo, Vicente Manansala, HR Ocampo, Anita Magasaysay, Cesar Legaspi, Demetrio Diego, Ricarte Purugganan, Jose Pardo, Bonifacio Cristobal and Arsenio Capili.

The struggle between modernists and conservatives came to a head in the AAP annual exhibition of 1955, which was marked by the walkout of the conservatives after the modernists won significant prizes.

Modernism opened the way to new artistic idioms, as well as enlarged the subject of art to span the entire range of human experience. Edades not only introduced modernism into the Philippines but also gave it his guidance and related it to the issue of national identity. He envisioned an art in, which the artist was to pursue an individual vision, while also discovering his identity as a Filipino.

Edades received the Pro Patria Award during the Rizal Centennial Celebration in 1961 and the Patnubay ng sinsing at Kalinangan award from the City of Manila in 1964. He was proclaimed National Artist in painting in 1976.

Edades retired to Davao City with his family. He taught at the Philippine Women’s college, and continued making art.