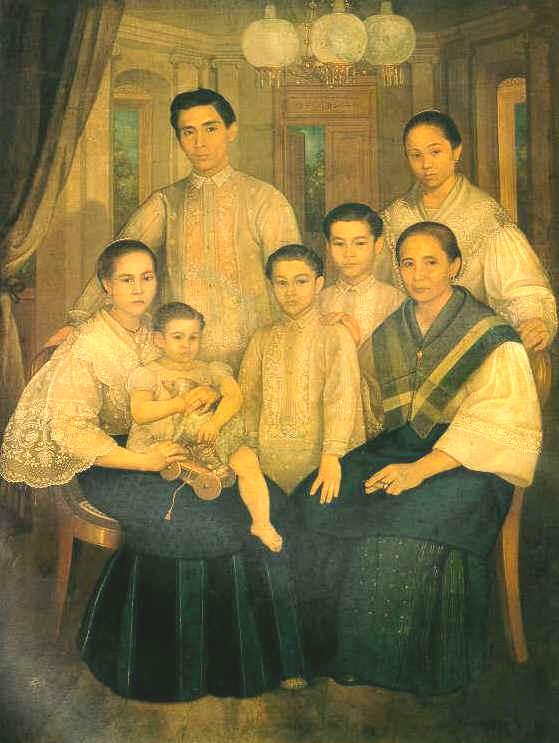 Simon De La Rosa Flores was descended from a family of artisans originally from Balayan, Batangas. Uncle Pio De La Rosa taught Simon the rudiments of the arts when he was in his teens. Later, he enrolled at the Academia de Dibujo y Pintura, studying under Lorenzo Guerrero and Lorenzo Rocha. Flores first gained attention in 1871 when the colonial administration commended him for the portrait of Amadeo I, which he presented to the province oil Pampanga. During this time he might already have made the acquaintance of Mons Ignacio Tambungui who introduced him to the wealthy families of several towns of Pampanga, for whom he executed many portraits and religious paintings. Simon married the monsignor’s sister, Simplicia.

Flores must have executed as many as 20 portraits which include the two versions of the Familia Quiason, and the portraits entitled Miguela Henson, Andrea Dayrit, Quintina Castor de Sadie, Severina Ocampo de Arroyo, Anastasia Sandiko Panlilio, and Lucila Panlilio. All these are known for the fine miniaturistic detailing of the embroideries of the pina costumes of the sitters, their elaborate jewelry as well as the appurtenances in their homes. Among Simon’s religious paintings are El bautismo de Cristo (The Baptism of Christ), San Roque, Parabola de la mujer arrepentida (Parable of the Repentant Woman), La Inmaculada Concepcion (The Immaculate Conception), and two versions of La Virgen Maria, (The Virgin Mary), inspired by a painting of Carlo Dolci. He decorated the interiors of the churches of Bacolor, Betis, Mexico, and Santa Rita towns of Pampanga. He also did mortuary portraits. Only two of his genre paintings are known in existence,” Primeras Letras,” (Learning to Read), and “Alimentando Pollos” (Feeding Chickens).

Simon Flores was the first Filipino oil native blood to garner a prize from an international exhibition. In 1876, he was awarded a silver medal at the Philadelphia Universal Exposition for his painting La musica del pueblo (The Music of the Town). In 1891 he won the highest honors for “Despues de la Ultima Cena (After the Last Supper) and” El Prendimiento” (The Arrest) in the art contest to commemorate the tercentenary of San Juan de la Cruz. In 1895 he won a silver medal for “La Expulsion” (The Expulsion), his entry at the Exposicion Regional de Filipinas. Before his death, he was able to submit paintings for the Universal Exposition of St Louis, Missouri, USA including a portrait of Andrew Carnegie.