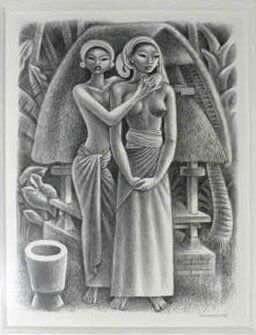 Miguel Covarrubias was a Mexican painter and caricaturist, ethnologist and art historian. Dis-satisfied with the start of his career in Mexico, he moved to New York City in 1924, and drew for several top magazines.

In the 1930s Covarrubias and his wife Rose made two trips to Bali where he made numerous works of art. Covarrubias also co-authored a book on Bali with artist Walter Spies.

During his later career, Covarrubias’ artwork and celebrity caricatures were featured in The New Yorker and Vanity Fair magazines. The linear nature of his drawing style influenced other caricaturists such as Al Hirschfield. Covarrubias also did illustrations for The Heritage Press including “Uncle Tom’s Cabin,” “Green Mansions,” and Pearl Buck’s “All Men Are Brothers.”