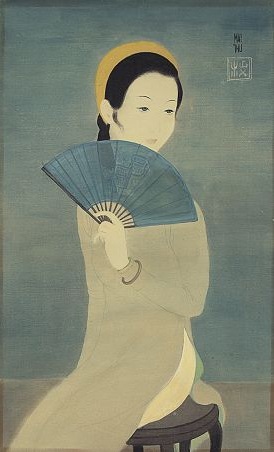 Mai Trung Thu was born in 1906 in Kien An. He was a member of the first class of the Ecole des Beaux Arts de Indochine along with Le Pho. During his education he developed a painting style in which he painted on silk, organizing patches of bold colors into defined areas of highlight and shadow. Thu’s early art celebrated folk themes and the innocence of rural Vietnam, and also suggested a nostalgia for the past.

In 1937 Mai Trung Thu visited France to take part in an exhibition. He settled there for most of the rest of his life. and gained a reputation as a painter of doleful, lovely women. He participated with the painter Le Pho in the Grand Exhibition in Algiers in 1941.

He was known as an expert player of the bau — a one stringed instrument — and also as a film-maker who recorded Ho Chi Minh’s visit to Paris.

His exhibitions in Paris included: