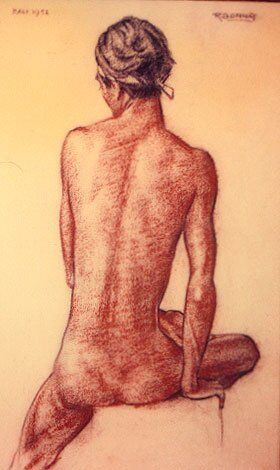 Artist and patron Johan Rudolf Bonnet was born on March 30, 1895 in Amsterdam. His parents, Jean Bonnet Jr. and Elisabeth Elsina Mann, were of Huguenot descent, and were bakers. After receiving education at a technical High School where he studied decorative painting, Bonnet took night courses at the Rijksacademie van Beeldende Kunsten. In 1920 Bonnet accompanied his parents on a vacation to Italy, and stayed behind in Anticoli Corrado, south of Rome. He stayed in Italy for eight years, and it was there that he first heard of Bali from the artist Nieuwenkamp, who had made illustrations of Balinese culture.

Bonnet arrived in Bali in 1929 where he was entranced by the pageantry and culture. He soon became acquainted with the artist Walter Spies and with the princes of the House of Ubud like Tjokorda Gede Agung Sukawati and Tjokorda Raka Sukawati. When Spies moved to Campuhan, Bonnet took over his water palace in Ubud and set up his studio.

Between 1929 and 1940 Bonnet stayed in Ubud and became involved in community issues including healthcare and education. He was also very involved in the Pita Maha movement, which encouraged local artists to raise their artistic standards. After the Japanese arrived in Bali, Bonnet remained free until 1943, when he was sent to Sulawesi. He spent the remainder of World War II in internment camps in Paréparé, Bolong and Makassar.

In 1947 Bonnet returned to Ubud where he tried to return to his pre-war activities. He organized the first post-war Balinese exhibition under the auspices of the new Republik Indonesia Timur. He also organized a new association, meant to follow in the footsteps of Pita Maha, called the Golongan Pelukis Ubud.

After President Soekarno erected a palace in Tampaksiring, Bonnet became a frequent visitor. He also devoted himself to preserving his artistic legacy from the Pita Maha years, and worked to locate funds for what would become the Museum Puri Lukisan in Ubud. Due to age and illness he was unable to finish the catalog of the museum, but he did donate his private collection that later became the core of the museum.

Rudolf Bonnet died in Laren, Holland on April 18, 1978. His body was ceremonially cremated in Bali in 1979