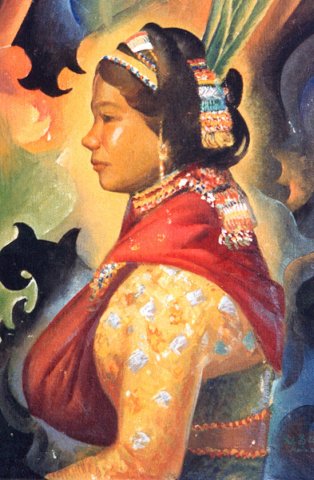 Painting by Galo B. Ocampo

HE studied at the University of the Philippines and holds the distinction of being the only Filipino to study heraldry abroad and to hold membership in the International Institute of Genealogy and Heraldry in Madrid.

During WWII, he did intelligence work for the guerrilla movement and became a captain. As his cover, he did stage backdrops for the Associated Artists group headed by Fernando Poe Sr. In the 1960s, during the administration of Pres Diosdado Macapagal, Ocampo served as curator of the Presidential Museum of Malacanang and, subsequently, as director of the National Museum and technical adviser on heraldry in the president’s office. During this time he also taught art at the University of Santo Tomas (UST) and at the Far Eastern University (FEU), where he became head of the Department of Fine Arts in 1971.

Ocampo staged the revolt against academic conservatism in the 1930s together with Victorio Edades and Carlos (Botong) Francisco. The triumvirate launched a crusade to stimulate artistic development along modernist lines. In 1934 they created murals-early works in interaction-for the lobbies of the Capitol and State Theaters, which expressed their new artistic credo and the rising nationalist consciousness at the height of the Commonwealth era.

Ocampo soon developed his own artistic personality. A key painting of the period was his Brown Madonna, 1938 which indigenized the image of the Virgin Mary. Moro Dancer, and Igorot Dance, were celebrations of indigenous culture in lively colors and designs. These paintings are characterized by a modernist sense of design, linear rhythms, and fresh colors.

In the 1950s Ocampo’s art was haunted with images of the war he had just lived through. The flagellant theme, fully brought out in Ecce Homo (Behold the Man), arises from harrowing experiences of the war.

Christ, crowned with thorns and hooded with the flagellant’s veil, stands with arms bound together, while in the skies, warplanes zoom, trailing smoke or releasing a fleet of parachutists. In Shades of Things to Come, 1955, a flagellant lies prostrate, his arms forming a cross on the ground, while shadows of airplanes are reflected on the sand. These paintings in brown tones convey the feeling of the modern wasteland, littered with the debris of war.

The flagellant theme would undergo a significant stylistic change in the rnid-1950s with the large painting, Christ in Flagellant. Here the entire space is filled up with figures, with the hooded Christ on the cross dominant. The receding space in previous works is now replaced by a vigorous design sectioned as in stained glass.

The artist was sent to Rome in 1956 by the Archbishop of Manila to train for the work of designing stained glass for the Manila Cathedral. For the cathedral he did the seals of different Archbishops of Manila as well as those of Manila, and various images and attributes of-the Virgin Mary in the country. He also did the designs for the stained-glass windows of Santo Domingo Church in Quezon City, and the sarimanok for the Philamlife building.

It was only in 1973, at the age of 59 and after his years in government service, that Ocampo held his first one-person show at Galerie Bleue. For this exhibit he produced a new series entitled Anthropographic Designs, in which he paid tribute to the Tabon man. His field work with Robert Fox in Palawan inspired him with images of the early Pilipino: Adam and Eve growing from the ancient stalagmites and reflecting the ever-changing hues of the mysterious caves.

His 1982 retrospective at the Museum of Philippine Art brought out all his themes, although the “flagellants” had shifted from their original somber mood to a more positive tone-the hooded figure of Ecce Homo now sits on a space missile in a lunar landscape. He expanded the ethnic theme to include the ati-atihan where masked figures cavort in gaudy revelry.

Ocampo’s awards from the Art Association of the Philippines are: second prize, Pounding Rice, 1951; honorable mention, Igorot Dance, 1951; special award, Weary Traveller, 1951; and the first Rotary Golden Anniversary Award, Bayanihan, 1955. He received the Patnubay ng Sining at Kalinangan Award from the City of Manila in 1964.

Signature of artist Galo B. Ocampo